(Extract from Beglane, Meehan and Nugent 2016)

An enclosure formed from an arc of large stones up to 2m in size and portions of earthen bank surrounds the site from the west, round to the north and terminating on the eastern side.  From the digital surface model this can be seen to continue in the southwestern quadrant, suggesting that it originally fully encircled the site with the possible exception of the steep, wet portion on the southeast quadrant.  Overall the enclosure measures c. 84m northeast – southwest by 62m northwest-southeast.  This oval enclosure is typical of the ecclesiastical enclosures found at other sites in the county and further afield.

The holy well is a natural spring. The well shaft is lined with roughly coursed stones and a partly rotted wooden frame. The well is covered by a loose door which needs to be opened to access the water.   Two cairns composed of fist-sized stones with occasional much larger rocks are located on either side of the well, with a tree growing out from the more easterly of these. These cairns functioned as penitential stations of the turas, and although not used as a rag-tree today, there is a tradition that it was used in this way in the past.  Until recently the well and cairns were currently fenced off using wooden posts and wire mesh, however as a result of the Conservation Management Plan the decision was taken to remove the fencing and allow sheep to graze the area. 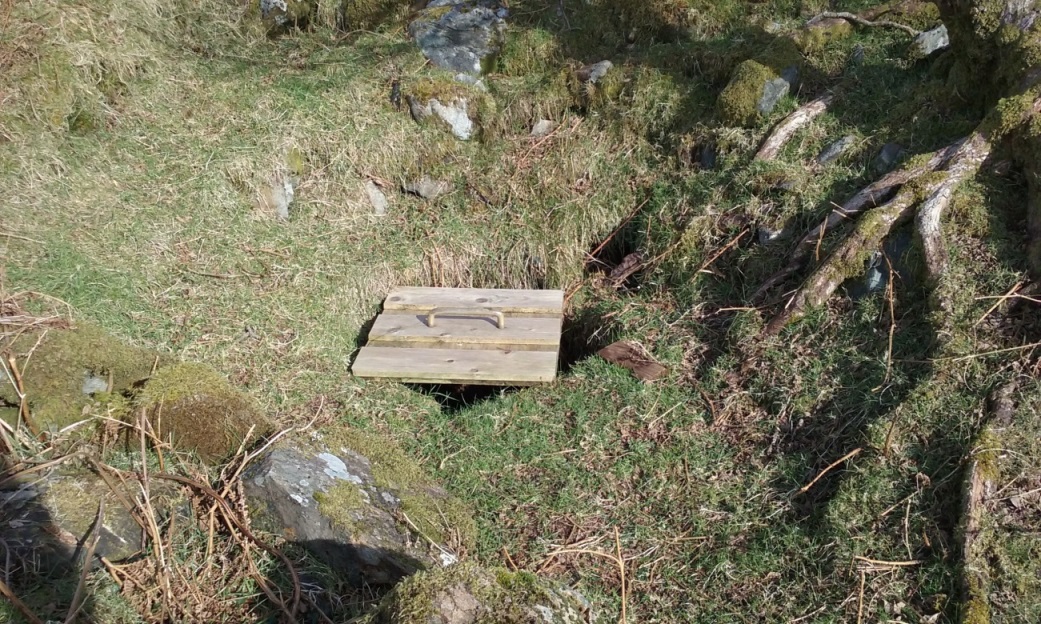 The graveyard and ecclesiastical enclosure

Close to the well is a wedge shaped graveyard (DG084-001002) which is defined by a stone revetment on the northern, western and southern sides and by an irregular upstanding wall aligned northeast – southwest (DG084-001001), which has been classified as an ecclesiastical enclosure. The graveyard measures 34m x 12m, extending beyond the bounds of the modern fence. Aerial photography clearly shows that it is formed from the western portion of a larger, ovoid enclosure again aligned northeast – southwest and measuring 34m x c. 27m wide, with the upstanding wall separating the graveyard from the eastern portion of the enclosure, and with the revetment wall continuing to curve around beyond the graveyard in the south-eastern quadrant.  Until recently the graveyard was enclosed by a modern fence, which has now been removed to allow sheep to graze the area. The irregular nature of the upstanding wall suggests that it may be formed from surviving sections of walls of several buildings that have been haphazardly joined to form a single boundary. 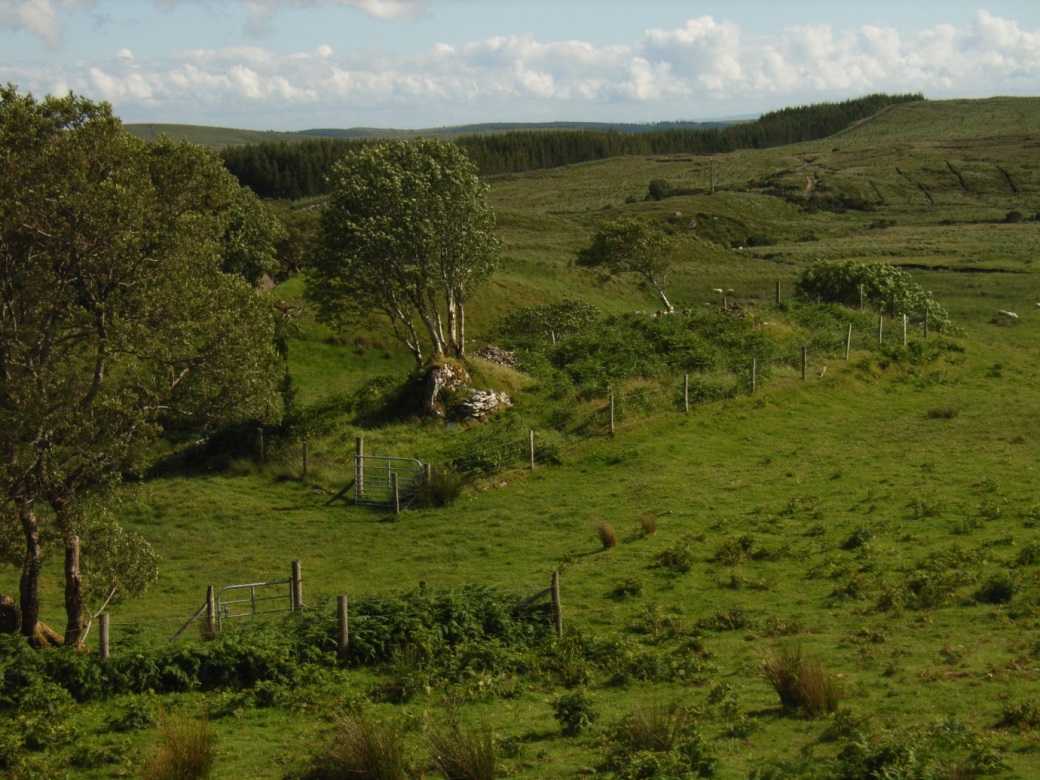 Fig: Overview of the fenced graveyard with the fenced well in the foreground

Inside the enclosure there are a number of features which were mapped by Dr James Bonsall using GPS and overlain on the aerial photography: a stone altar built against a large heap or possible outcrop of rock, three sub-circular mounds and one linear mound of small stones, two areas with possible stone platforms and a number of grave markers.

Fig: Aerial view of the graveyard showing gravestones and other features

At the north-eastern extent of the graveyard, but inside the line of the boundary a low, rectangular platform measuring c. 4m x 2.5m and 0.3m high is defined by a stone revetment.  On the south-western side this abuts or possibly underlies what may be a heap of large rocks, or possibly a natural rock outcrop.  Without excavation it has not been possible to determine which; although the former seems more likely as this c.2m high stone feature may, for example, have been constructed from demolition rubble.  The stone altar is built against this rock feature. This measures c.1.05m wide, 0.63m high and 0.45m deep. It is believed that the altar was used for mass during Penal times, and it has continued to be used in that way in the recent past.  A modern metal cross has been embedded in the rock feature and a rowan tree has grown out from crevices, and has acquired the status of a ‘fairy tree’.  There are a number of devotional stones sitting on the altar.

The cross and tree in the graveyard

The graveyard was still occasionally used for the burial of adults until early in the twentieth century (Maguire 1920, 503) and for unbaptised babies and unusual deaths within living memory.  There are a number of low stones in the grass which act as grave markers (Figure A2-3).  Thirty-four probable grave markers were identified in the central third of the graveyard, with a further three close to the northern extent of the enclosure.  Some of these appeared to form irregular lines, suggesting a degree of order in the way that the burials were arranged.

There are three circular stone mounds in the graveyard: one close to the altar and two close together at the southern end of the enclosure, these measure c. 2.3m, 2.7m and 3m in diameter respectively, and are c. 1.2m, 0.9m and 0.9m respectively in height.  These penitential cairns mainly consist of fist-sized stones and were an integral part of the traditional pilgrimage rituals at the site.  A linear upstanding feature close to the altar measures c.5.8m by 1.8m and 0.6m high and may be the remains of the wall of a building.  A sub-rectangular depression at the southwest extent of the graveyard is bounded by stone.  This measures c.1.3m northeast-southwest by 1.9m northwest-southeast and c. 0.3m deep.  It is possible that this marks a partly-buried building or a gap between buildings.

The arch and small enclosure

The arch is part of an enclosure measuring c.5m by 6m which was described as the remains of a ‘Megalith’ by McGill (1963).  It should be clearly stated that this feature does not resemble any known form of megalithic tomb and this interpretation is considered highly unlikely.  The arch is also sometimes referred to as St Colmcille’s Arch.  It consists of two orthostats approximately 1m high with a lintel stone resting on them.  Piled on the lintel stone are small stones which form a pyramid.  Passing through the arch one enters a sub-oval enclosure formed from a combination of large rocks up to 1.5m in size on the northern side, as well as smaller stones typically 20-30cm in size.  Careful examination of the digital survey model (see Conservation Management Plan) shows that this enclosure abuts the line of the large ecclesiastical enclosure.  Furthermore, although both features are overgrown with grass and have substantial quantities of soil in their matrix, at the point where these join, the stones of the arch enclosure are much smaller and seem to overlie the stones of the main enclosure.  These two pieces of evidence strongly suggest that the small enclosure post-dates the large ecclesiastical enclosure.  Scaled drawings of the elevation of the arch from both inside and outside the enclosure were drawn by volunteers.

Scaled drawing of the arch surveyed by volunteers